The New York Department of Financial Services (“DFS”) has heard the industry’s cries and extended the comment period for the proposed BitLicense regulations, the most comprehensive and impactful government regulations ever proposed to affect bitcoin.  The Chamber of Digital Commerce and Chinese Bitcoin Exchanges released their comments to the public just a few days before.  Superintendent Lawsky gave a tell-all interview with CoinDesk, and ESPN accepted their first bitcoin payment. Just a few of last week’s events in the not-so-boring world of bitcoin.

After receiving numerous petitions from the Chamber of Digital Commerce and others, DFS extended the comment period from September 8 to October 21, 2014.  In his timely interview with CoinDesk, NY Superintendent Ben Lawsky acknowledged that correspondence received from individuals and organizations, such as the Chamber of Digital Commerce, did play a factor in the DFS’ decision to extend the comment period. More generally, Lawsky claimed that much of the law has been misinterpreted. For instance, he reiterated that software providers were not intended to be covered under the rules. Lawsky also pointed out that should any material changes be added to the BitLicense regulation, an additional 30-day comment period will be opened.

The Chamber of Digital Commerce submitted their comments to DFS last Tuesday and made them publicly available on their website. The Chamber suggested a small business exemption and requested an extension of the 45-day comment period, which they say is a severely inadequate timeframe for regulations of this magnitude.

“We have been very vocal in encouraging the industry to submit comments to the DFS.  The Chamber’s comments are posted on our website and the industry is welcome to use them as a resource” said to Perianne Boring, President of the Chamber.  Now that the comment period has been extended by another 45-days the Chamber is “looking forward for opportunities to work, and help the industry work, with DFS, to put forward proposals that meet DFS’ goals without stifling beneficial innovation.”

As a testament to the international importance of the NYDFS’s proposed landmark regulations, three of the largest Bitcoin companies outside of the US have reached out to the NYDFS with a letter. The three CEO’s of the Chinese Bitcoin exchanges addressed the far reaching implications of the “BitLicense Regime.” Regulations, especially those emanating from New York, have significant influence, both domestic and international. Concern for the top trading pair CNY/BTC and the potential damage to overseas businesses should be a leading consideration of NYDFS.

Last Wednesday, the Australian Taxation Office (ATO) released a federal-level tax guidance outlining Australia’s future treatment of all cryptocurrencies. Thus far, the ATO still does not view Bitcoin as a legitimate foreign currency. Under the proposed guidelines, individual users would be free from capital gains taxes; however, Australian Bitcoin businesses might be charged a 10% Goods and Services Tax, which might even happen two times.

Chain, an API that makes it easy to interact with the Blockchain data to build further applications, just raised $9.5 million in venture capital funding.  The funding round was led by Khosla Ventures and also included RRE Ventures, Thrive Capital, Pantera Capital, SV Angel, and Barry Silbert, among others.

The Bitcoin community is still in its early phase, developing the basic infrastructures. Chain is dedicated to helping create products to make Bitcoin a more user-friendly experience, and will promote mainstream adoption of Bitcoin. Chain has only been open for about six months and has already hired over a thousand developers.  And of course, now that they just locked in another round of funding, they’re currently hiring.

A report by Wedbush Securities says Bitcoin’s price volatility will continue, which will benefit both investors, and consumers. Gil Luria, author of the report, stated that volatility is valued by traders, citing the connection between volatility and trading volume in equities. More advanced trading tools such as derivatives, margin trading, and computer trading, are now being introduced into the Bitcoin market, which makes it easier for advanced traders to enter the Bitcoin trading market.

Former director of the US Mint, Edmund Moy, stated in an op-ed in Newsmax that “using bitcoin instead of credit cards could put up to $50 billion back into the pockets of merchants and consumers, and create 300,000 jobs every year.”  Adopting Bitcoin could offer businesses billions of dollars in transaction fee savings.  For companies operating on small profit margins, especially small business, accepting Bitcoin could increase their profitability by 14.6 percent. Bitcoin is also safer and more efficient than credit cards. Consumers worried about getting their identity stolen, card cancelled, or denied would know that their identity is safe using Bitcoin.

OKCoin Bitcoin exchange recently published results of an audit that details that they have 104% of Bitcoin reserves for customer balances. The exchange plans on implementing a system for customers to individually verify their account balances. Other Bitcoin exchanges such as Kraken, and Bitfinex are also releasing audits of their Bitcoin reserves, making this practice an industry standard. This practice should alleviate the concerns consumers have over liquidity of the exchanges, and avoid industry disasters like Mt. Gox.

The traditional financial system came crashing down in 2008 much because banks are allowed to loan their reserves. This house of cards also perpetuates the boom-bust business cycle.  Bitcoin exchanges holding over 100 percent reserve is very profound because depository institutions with net transactions accounts that are between $12.4 million and $79.5 million are only required to hold 3% reserves.

Overstock, the online retailer, plans to accept bitcoins for its international customers. Currently, bitcoin payments account for one quarter of one percent of Overstocks sales or about $15,000 a day. Patrick Byrne, Overstock’s CEO, is staunch advocate of the digital currency and has even headlined some Bitcoin events. By accepting bitcoin on the company’s international site, O.co, Overstock plans to save 8 percent in processing fees.

Coinbase just acquired the block explorer Blockr.io.  Two of Blockr.io’s team members, Sašo Matejina and Samo Drole, a software engineer and designer respectfully, will join Coinbase’s San Francisco office. They will work on Coinbase’s API “for developers who want to build on top of bitcoin.” Coinbase said that they liked Blockr.io’s design and API and had been following the company since earlier this year. Blockr.io will remain as is for now until the two make their transition to Coinbase.

Lamassu Bitcoin Ventures is not holding back on expanding operations in New York, despite the huge regulatory risk posed by New York’s proposed BitLicense regulations, which might apply to ATM operators. Lamassu just put their latest ATM machine in the heart of the West Village in New York City.

Matt Russell, chief marketing office of PYC Inc., the ATM service provider, told Bailey Reutzel of PaymentsSource, “We’re prepared to abide by it [BitLicense]; we’re a company that wants to bring Bitcoin to the masses and we want to do it legally.”

Picture of the Week: Matt Russell

Our picture of the week is of Matt Russell outside of Flat 128, the newest Bitcoin ATM home in Manhattan. 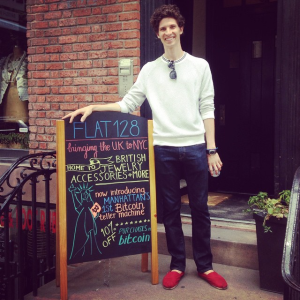 Quote of the Week: Perianne Boring

“Ask not what Bitcoin can do for you – ask what you can do for Bitcoin.”

This Friday, August 29th is the first-ever Bitcoin Education Day, hosted by the Chamber of Digital Commerce. BBR’s Quote of the Week comes from the Digital Chamber’s very own, Perianne Boring, Founder and President of the non-profit, and bitcoin activist.

Plug of the Week: Support John Scianna for Draper University

John Scianna is currently a student at the University of Florida studying business and has been nominated to attend Draper University, an entrepreneurship program founded by venture capitalist and bitcoin enthusiast Tim Draper.

Scianna was first introduced to bitcoin in 2012 during a study abroad program at the University College Utrecht, where he studied the Cyprus banking crisis.  He is a bitcoin miner, investor, contributor to Bitcoin Magazine, volunteer at the College Crypto Network, and intern at the Chamber of Digital Commerce.

You can help John take his fledgling bitcoin career to the next level by donating to his cause here.