The Chamber of Digital Commerce launches a Political Action Committee, Coinapult announces they are going to give every resident of Dominica bitcoin on pi day 2015, and every Member office of the US House of Representatives has been given educational material on Bitcoin. These are just a few of the not-so-boring events in Bitcoin last week.

The Chamber of Digital Commerce hosted the first ever Bitcoin Education Day on Capitol Hill Friday.  Over 32 Bitcoin professionals from 12 states flew in to Washington, DC and briefed over 70 Congressional legislative aides, while introducing themselves to the remaining 365 offices.  Bitcoin factsheets were delivered to the office of every Member of the US House of Representatives. According to Rep. Stockman, the Member sponsor,  “Perianne Boring and the Chamber of Digital Commerce have staged a breakthrough event, taking Washington’s grasp of Bitcoin up to a much higher level.”

David Hedqvist, a long time Swedish Bitcoiner, has reached an important milestone in his EU case that will determine whether all EU Bitcoin exchanges, not just those in Sweden, owe VAT taxes. Last week, Hedqvist reached out to the Bitcoin community to raise funds for the upcoming legal proceedings with the EU Court of Justice. This week, Hedqvist announced that an anonymous donor has provided all the funds necessary for the next step in the trial.  He has now hired Mannheimer Swartling, a reputable Swedish law firm, to handle the upcoming submission.

(no summary necessary – click on link above for the statistics)

In a move that signals full commitment to bringing the economic and social benefits of digital currencies to the attention of lawmakers, the Chamber of Digital Commerce announced the formation of a Political Action Committee. “Creating a PAC is an important next step for the Chamber, as a crucial way to contribute to, and participate in, the political process,” said Perianne Boring, president of the Chamber.

The Caribbean island, Dominica has been chosen for the “Bit Drop.” Partnering with Coinapult, each of the 70,000+ residents will receive at least $10 worth of bitcoin on March 14, 2015 (pi day) via SMS messaging.  The “Bit Drop” project has support from Dominica’s government, which is currently helping educate the population about bitcoin. This experiment will serve as an important use case to expedite bitcoin adoption. The Bit Drop will be a Bitcoin Island Party for the entire nation of Dominica and anyone is invite to attend.

Coinbase, the hosted bitcoin wallet and payment processor, announced that its hot wallet has been insured for almost a year. The insurance provided by Aon, an international leading insurance broker, covers losses that stem from data breaches, hackers, accidental losses and employee theft. However, hacked personal information is not necessarily covered under the insurance policy. Coinbase, did not clarify if their cold wallet was insured; however, their cold wallet is less vulnerable to these types of risks.

SFOX, The “E-Trade” Of Bitcoin Launches

San Francisco Open Exchange (SFOX), is a new trading platform where people can “buy, sell and invest in bitcoin exchanges kind of like an investor buys and sells stock on E-Trade,” according to TechCrunch. SFOX operates like a trading platform that finds the best price via a number of exchanges. SFOX does not directly buy or sell bitcoins, rather they facilitate trading through their platform. SFOX offers algorithmic trading, stop limits and other standard trading features that one might find in an online stock trading platform like E-Trade. SFOX is backed in Y-Combinator, a seed funder for start-ups that also invested in Reddit, dropbox, Scribd, among others.

BitPay, bitcoin payment processor, has become a partner for Demandware, which offers a cloud-based ecommerce solution for higher-end clients. Some of Demandware’s clients include Adidas, Converse, Callaway and Columbia; however, these merchants may choose to accept bitcoin or not. In addition, BitPay released a plugin for Spree’s ecommerce platform their 45,000 merchants to accept bitcoin.

Xapo, the provider of bitcoin debit cards, introduced Xapo Deposit that allows users to wire transfer USD or Euros to their account to acquire bitcoin. The funds are converted to bitcoin and placed directly in users accounts. This update from Xapo enables its users to acquire, store and transact with bitcoins all in one location.

One of the largest banks in the world, the Santander Group has announced they are conducting a new study on Bitcoin’s impact on traditional banking systems. The banking giant is looking for experts in the fields of data analysis, banking, academia, as well as Bitcoin enthusiasts. The full report will be released in the latter part of September. Santander Group operates on five continents, employs over 180,000 people, and its reported revenue was €43bn. Santander Group now joins a growing list of financial institutions including the National Australia Bank, ING, and the World Bank, that seek to understand Bitcoin’s potential impact.

A recent Bitcoin conference in North Carolina agreed that the need for a more efficient network encrypting system is the most pressing issue facing Bitcoin today. The current system requires that miners, who secure the network with processing power, face large costs with electricity, and hardware, with little profit leftover. Miners therefore have to sell their Bitcoins for traditional currency to pay for expenses. Using a more efficient system such as Delegated Proof of Stake, would allow for more mining efficiency, and keep more Bitcoins in the ecosystem. One alternative coin, BitsharesX, uses this new algorithm, and its market capitalization has spiked to $100 million.

Concerns about government surveillance and Bitcoin regulation, such as BitLicense has sparked new initiatives to preserve Bitcoin anonymity features. The main method to protect Bitcoin anonymity is to use a process called, “coin mixing,” in which Bitcoins are sent to multiple intermediary wallets, and then to the destination Bitcoin wallet, obscuring the sender and the recipient of the bitcoins. Darkwallet, is a program that that runs on Google Chrome’s browser, or Mozilla Firefox’s, without relying on a third party to operate Bitcoin transactions. Bitcoin Fog is another business that offers the ability to “mix bitcoins,” but through a third party.

The passing of Hal Finney, early Bitcoin developer, and the first man to receive a bitcoin transaction, has sparked a movement to honor the man by starting the Hal Finney Bitcoin Fund. The Fund will allow the Bitcoin community to vote and decide which organizations will receive funding for ALS research.​ Finney, hoped that one day technology would advance enough to cure his diseasse and had his body cryonically frozen upon his death. 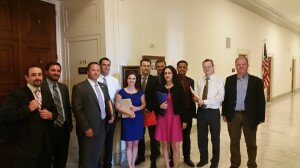 Our photo of the week is from the participants of Bitcoin Education Day on Capitol Hill.

“The improvement of understanding is for two ends: first, our own increase of knowledge; secondly, to enable us to deliver that knowledge to others.” – John Locke

Our quote of the week is from John Locke, one of the great English philosophers from the Enlightenment period who was born on August 29, 1632. This past Friday, August 29, 2014 members of the Bitcoin community and members from the Chamber of Digital Commerce shared their knowledge of Bitcoin with representatives of the United States Congress.


Monday, August 25th, the BitGive Foundation announced that they received approval to be a tax-exempt charity from the Internal Revenue Service (501c3). This landmark announcement enables donors to receive tax deductions for their donations and gives more legitimacy to Bitcoin charities.