This week Xapo and Circle formed an alliance to challenge the New York Department of Financial Services BitLicense regulations, Sweden might get a bitcoin political party (if it can garner 1,500 signatures), Goldman Sachs is upping their salaries in attempt to retain young employees that are leaving for tech start-ups, and New York University and Duke University now offer courses on digital currencies.

Click on the headlines below for links to the full stories.

Xapo recently posted on their blog that they support Circle’s statements regarding DFS’ proposed BitLicense regulations. Xapo and Circle have now stated that they “will have no choice but to block New York customers from accessing services,” sending a strong message to New York regulators that their proposed regulations will drive the digital economy out of the state.

Circle and Xapo are two of the most well-funded companies in Bitcoin, and are committed to regulatory compliance. Both these companies have said BitLicense would be impossible to comply with.

Google Analyst Publishes Report On How To Regulate Bitcoin

Since the NY Department of Financial Services introduced its BitLicense proposal, the Bitcoin community has been discussing what appropriate regulation looks like for this nascent technology. Andy Yee, a policy analyst for Google, recently published “a conceptual framework for regulating bitcoin.” The article was published at Internet Policy Review and Mr. Yee made the statement that he was writing as an individual and not as a spokesperson for Google.

Yee states that “intermediaries in the information layer are appropriate targets of regulation”, as opposed to users or the protocol itself. These intermediaries could include exchanges, wallet services, and payment processors.

A representative from Her Majesty’s Treasury (the United Kingdom government department overseeing public finance) told cryptocoins news that the department will publish a Bitcoin study that outlines proposals for the 2015 budget. Chancellor George Osborn, the overseer of HM’s Treasury, is a public supporter of Bitcoin, personally owns bitcoins and declared “we can make London the Fin Tech capital of the world.” London has the majority of Bitcoin businesses in Europe, and recently received more Venture Capital investments than respective American companies in Europe. Consumers have complained about British Banks closing the accounts of Bitcoin businesses, and while the Treasury has not commented on these incidents, it is believed that this will be addressed in the 2015 budget proposal.

A select faction in Sweden is organizing the first Bitcoin political party entitled, bitcoinpartiet. The group is seeking 1,500 signatures to be registered as a political party. The goals of the party are to promote Bitcoin and prevent the government from stifling innovation of regulatory compliant companies. The party wants Bitcoiners to have a voice at the polls to begin to level the playing field with the very powerful traditional banking system. Bitcoinpartiet believes that bitcoin adoption could bring transparency to government spending, especially to the military industrial complex, and bring access to financial services to the un and under-banked populations.

BitInstant CEO, Charlie Shrem, on Friday plead guilty to aiding and abetting an unlicensed money transmitter business. As part of the plea bargain, Shrem will hand over nearly $1 million USD to the DOJ. Shrem’s partner in crime, Robert Faiella, pled guilty to operating an unlicensed money transmitter business that helped Silk Road users exchange cash for Bitcoin. The two men could each face up to five years in jail and both will be sentenced on January 20, 2015.  Shrem was initially charged with violation of the Patriot Act and was facing up to 30 years in prison.

This school year, two top-tier universities will add cryptocurrency classes to their rosters. New York University is offering The Law and Business of Bitcoin and Other Cryptocurrencies, which starts in the fall.  Starting in the spring, Duke University will offer Innovation, Disruption and Cryptoventures.

America’s Best and Brightest Moving from Wall Street to Bitcoin

International Business Times says millennials would rather work in technology than on Wall Street. IBT found that millennials are attracted to technology startups because they have better working conditions, citing the Bank of America incident where an intern died of a seizure after working 3 straight days. Kevin Roose, a famed author on Wall Street culture notes that even if high-achieving students go to work on Wall Street, they often leave after a couple of years for a tech company. Financial companies such as Goldman Sachs, Bank of America, JPMorgan-Chase, and Citigroup all plan on increasing salaries in order to recruit more of these driven millennials.

Swedish bitcoin miner manufacturer, KnCMiner, has raised $14 million in Series A funding. Up until now, the manufacturer has been totally self-funded, but with new plans of developing faster ASIC chips and expanding into hosted mining services, additional capital is needed. KnCMiner plans on having a Series B round next year, and hopes to rake in $70 million in funding.

Many high volume Bitcoin traders are beginning to use brokers for their Bitcoin transactions. This sort of brokerage trading is referred to by some as over-the-counter (OTC) trading.  Brokers act as a trusted third party intermediary.  Circumventing exchanges could reduce price volatility coming from high volume trading on exchanges. Consumers like the security and privacy that comes with brokers, and believe that they can develop greater trust with an OTC trader than a Bitcoin exchange. The emergence of “bitcoin brokers” is a sign of financial sophistication that could help build the bridge to institutional investors.

The BitFury Group, bitcoin infrastructure provider and bitcoin transaction processing company, has elected to use BitGo Enterprise for its treasury management solutions. BitGo is a pioneer of multi-signature wallet technology and a leader in providing their bitcoin security platform. BitGo’s platform enables companies to utilize multi-signature technology and hierarchical deterministic wallets, which provides multiple layers of uses and ease of use.

Miami based Alternet Systems, Inc, a Business to Business (B2B) facilitator for digital currency and mobile commerce services, announced a partnership with BitPay to launch its worldwide payment processing business. Alternet Payment Solutions plans to facilitate B2B transactions through Bitcoin and allow their customers to settle in their local currency. “Our strategic agreement with BitPay will allow us to initiate our sales process with several potential clients in Latin America and the Asia-Pacific region,” said Alternet CEO Henryk Dabrowski.

Indonesian Bitcoin exchange, Bitcoin.co.id, just announced a partnership with Indonesia’s largest convenience store chain, Indomaret. Indonesian Bitcoin users can now go to any of 10,000 Indomaret stores to add Indonesian Rupiah to their Bitcoin.co.id exchange account as easily as they pay other bills. As the world’s 4th largest country by population, Indonesia is currently catching up to countries like China and the United States in terms of Bitcoin adoption.

Picture of the Week 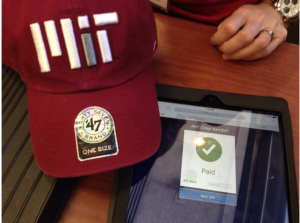 Our picture of the week comes from Dan Elitzer who used bitcoin to purchase this hat at MIT COOP, MIT’s bookstore that started accepting bitcoin payment this week via BitPay.

Our tweet of the week comes from Charlie Shrem who entered a plea deal with the US Department of Justice, costing him $950,000, but shaved at least 25 years off his prison sentence.

Happy to be moving forward

“It [bitcoin] is probably the best form of money we’ve ever seen.”

Our quote of the week comes from Wences Casares, Xapo CEO, in a youtube video titled “Why Bitcoin is Better Than Gold” where he outlines how bitcoin is a better store of value and transfer of payments.