It’s no secret that Bitcoin has a public perception problem. Most people’s first impression of bitcoin is tied to either the Silk Road or Mt. Gox scandals. However, the dialogue is slowly but surely beginning to look up. New York became the first state to finalize virtual currency regulations last month; putting an end to the impression that bitcoin is unregulated. In Texas, numerous lawmakers are making public statements about the benefits bitcoin can bring to the markets. And the Canadian Senate put forward an extremely positive and encouraging new release concluding their study on digital currency.

The bitcoin community is proving to be resilient as almost $500 million in venture capital has already poured into start-ups and small businesses just this year. Many of these companies are earning funding to solve fundamental e-commerce issues around the world. They are creating more secure and efficient payment rails, providing access to the global economy in developing worlds, and strengthening electronic commerce products, such as smart contracts. While this Bitcoin experiment is still in very early days, more and more use cases are being developed that are unarguably positive for consumers.

NYDFS Benjamin Lawsky Announces Final BitLicense Regs, and His Resignation
On June 3rd, after almost two years of hearings, public comments and much debate New York Department of Financial Services Superintendent Benjamin Lawsky announced the final version of “BitLicense”.  He also confirmed his plans to step down this summer from his post as Superintendent. According to the New York Times, he has plans to open his own firm and to lecture at Stanford.

Big news in Texas as Governor Greg Abbott just signed a bill into law to repatriate Texas’ gold from the federal government and is building their own repository — “which shows a deep, deep mistrust of the federal government”, according to Bloomberg. Interestingly enough, the sponsor of the bill, Rep. Giovanni Capriglione is also a bitcoin supporter. In an interview with the Epoch Times he said,

“I have bitcoins and I use it as an alternative as well. Every individual should have as many options as possible to be able to transact business. The more options individuals have the more liquidity there is, the more comfort there is, and the more stability.” Governor Greg Abbott accepts bitcoin for campaign contributions as well.

Canada’s Senate Banking Committee released a report on digital currency last week addressing the relevant risks and opportunities that digital assets like Bitcoin present. The committee found that although there are a few risks to digital currency, “the benefits of this technology outweigh the challenges it introduces”. Therefore, the committee recommended only “light touch” regulations to prevent the impediment of innovation in the field.  In the best conclusion to this story, the Committee illustrated the innovation of the Bitcoin by publishing the report on its blockchain providing its ‘proof of existence’.

Mirror (formerly Vaurum) closed an $8.8 million round of financing bringing its total amount raised to $12.8 million. Mirror is a smart contracts platform powered by bitcoin, which aims to democratize access to financial markets through peer-to-peer trading. “There is an unbundling of the financial services industry that’s occurring right now, and we see an enormous opportunity to provide advanced, more efficient services for risk management and hedging,” said Mirror Co-Founder and CEO Avish Bhama.

BitPay Expanding Use Cases For Its Payment Processing Capabilities

Banks are finally beginning to realize that the technology underpinning Bitcoin might make transaction clearing a lot easier. Banks are excited to be able to have a secure method of sending money between banks and having it settle near-instantaneously. BitPay has been processing bitcoin payments for years; however, its contributions to utilizing core Bitcoin technology are just starting to be realized by the banks. “There are so many use cases in a bank that this technology can address and make better,” said Bitpay’s co-founder and CEO Stephen Pair.

Matthew J. Martin is trying to broaden the spectrum of financial opportunities available to Muslims with his new startup Blossom Finance. Islamic “sharia” law prohibits Muslims from using interest-based financial products. According to Islamic Finance, as much as 25% of the world’s population identifies as Muslim; however, sharia-compliant assets are very rare, less than 1% of the world’s assets. Using Bitcoin, Blossom Finance is facilitating provably interest-free loans in Indonesia, which has over 200 million Muslims.

That’s dope!!!: @DopeMovie is the FIRST movie in history to accept #Bitcoin for ticket purchases! http://t.co/CnlgMOqBrz in theaters FRIDAY!

“Economic empowerment and entrepreneurship are the cures for global terrorism.” Hernando de Soto, via Marketwatch 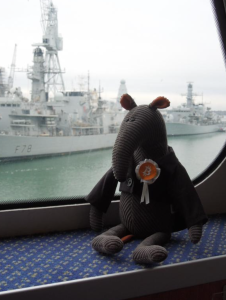 The Bitcoin Rat spotted in Portsmouth Gun Boat Diplomacy on his #bitworldtour, www.CryptoRats.com

« Boring Bitcoin Report: Week of May 26